Two Sundays ago, in a torrential downpour, 10-year-old Sophie Phillips and her grandmother, Susan Graham, should have taken their vacation day to sleep in and read. Instead they were up early, and in the garage, with four wooden planks, and four ten-year-old hickory logs with a mission: They were planning to outwit Huck Finn.

Paying no heed to Mother Nature’s relentless stream from the sky, Phillips and Graham took the four hickory logs, bound them with baling twine, seized their hatchets, and notched the logs together. They then fastened four, 2x6x10 foot planks of yellow pine together to create a makeshift deck for the raft. Graham, a self-acclaimed packrat who admits she saves everything less she needs it, took her collection of unclaimed Styrofoam hunks she has been saving that float by her River Road home and used them to cram in between the old plywood scraps to secure their raft’s flotation. Phillips and Graham then lashed the planks to the logs to make a sturdy framework, and nailed it all on top of the planks. The next morning after two additional hours of diligent work, Phillips was just as proud and thrilled by their finished product, as she was by her own discovered strength. Phillips found herself euphoric, much like her older brother had been four years previous when he and Graham had completed their Huck Finn raft together during his summer visit to Mystic.

“This is the first time Sophie’s ever seen this happen before,” Graham says, admitting they worked on the raft rain or shine to complete it in time to float it before Phillips departure back to her year-round home in upper state New York. “Her older brother made one four years ago with me, and before that members of a neighboring Croatian family were the first to launch this ten years ago.”

Two days after re-building their craft, on a brilliantly sunny, humid day, a flushed Phillips, and a bandanna- clad Graham were eager to launch the raft they slaved over out into the river. Down by the banks, barely visible to passersby if it weren’t for their two colorful figures and a blue and white umbrella they had open on the shore, Graham and Phillips resembled a tranquil scene from the Georges Seurat painting entitled, “Sunday on the La Grande Jatte.” Just as Seurat had captured his watery scene on canvas in 1884(the year before “ The Adventure of Huckleberry Finn,” was first published in the United States) Graham and Phillips were facing the moving current, marking their historical moment together, reminiscing about the muskrat and otter they had seen, and the intact horseshoe crab they had left downwind bleaching in the sun hoping the sea gulls would peck it clean.

Equipped with more then 150 feet of recycled underground computer cable, one end on their boat, and the other end securely tied onto shore in case of a tidal change and for extra safety because Phillips is partially deaf, Phillips and Graham held their breath, as momentous as their balance. Phillips, leaning into her grandmother to hear her, closely followed her grandma’s instructions on how to slowly wedge the cedar pole to get them off the shore and into the water. Phillips, a small, and determined frame bundled in a life jacket, employed a long cedar pole carved smooth and flat to shove her and her grandma out through the muddy quick sandy bottom of the river and into the current.

“She learns so quickly because she pays attention,” Graham yells out from the water, after assuring Phillips she’s doing an outstanding job navigating. Thoroughly elated, and slightly stunned to find they were floating because of the weight of the logs she had helped her grandmother lift when they were making the raft, Phillips couldn’t keep the smile off of her face. Not a nerve out of place.

“I feel like I am in space even though I know I am on the water on the earth,” Phillips says. “I know I am only on a piece of wood, but it doesn’t even feel like a boat.”

Phillips wasn’t so far off. Those logs were just pieces of wood, lying laced together in an innocuous pile for nearly four years after her older brother had assembled the raft with Graham when he was old enough. Shortly afterwards they were disassembled. Graham says this year it was her and Sophie’s opportunity to unearth the logs from their pile, to stack, arrange and align them into something useful.

Always looking for a memorable project to do with her grandchildren on their short-lived visits, like berry picking, or teaching them the concept behind boat swaying, Graham says she always asks them before their arrival what they want to do with their time together. Well-read, and an intellectual herself, Graham strives for occasions to teach her grandchildren, especially instructing them about subjects regarding their bodily strength. “ I teach them physical principles,” Graham says.

Graham recalls the Fourth of July when she taught her grandchildren about the “Bosun’s Chair,” which she says is a term used for the people who shimmied up and down a mast on a ship responsible for the repairs. To illustrate what she had verbally explained to them, Graham set up a pulley system, using a tag line on a big ash tree in her yard that she says the children absolutely loved pulling themselves up and down on all day.

“When the children are old enough, I ask them if they want to build a raft.” She said building a raft was a quiet project she could do with Phillips, one that was fun but was also enriching, because she could school Phillips about levers at the same time. She says she also believes it serves as a lesson about making something out of nothing. “This is a project about doing something using only what we have.”

Surely, after her inspiring summer excursion floating on a handmade raft out on the open water, listening to her grandmother reading the original version of “ Wind in the Willows,” Phillips will return to Sleepy Hollow, NY, and enter her fresh fifth grade class, with renewed confidence. Long after, she will still hear her a life lesson: Her grandmother’s voice in her head, reminding her to let her will pull her weight.

“Remember you have to learn to pull yourself up by your own bootstraps.” 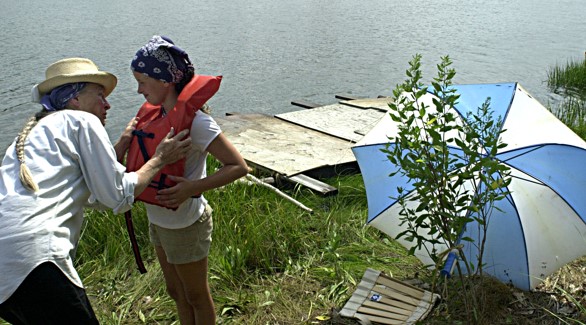 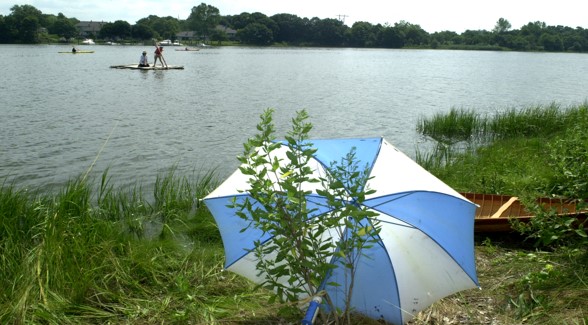 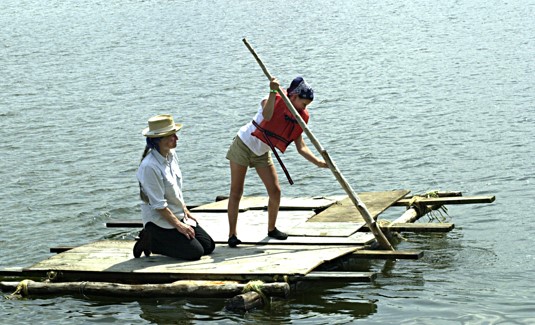