There was only one set of footprints going up the hill to where the snow angels were found, and none heading back down. A bus driver, eating a late dinner that night in a restaurant nearby the hill says he watched the very same angel who made those prints fly away immediately after he completed them. The bus driver had seen that the man had walked back down in the same footprints he had made in the middle of the night, but he also knew the man did it on purpose. That he wanted to leave behind a mystery, leave behind some joy for someone else.

That earthly embodiment the bus driver saw that night with his arms spread wide and his back against the frozen ground leaving his heavenly imprints behind was Anthony Floyd Little, one of New London’s staple characters. Wings would explain Little’s, gypsy-like wanderings, his prophetic appearances in the area, and his innate and peculiar ability to penetrate the private, personal, and social membrane that is, New London’s womb. He knows when the firemen meet on Tuesday to play the bagpipes, he knows who will be on the pier at a certain time. Like any spiritualist, he takes it all in and retains the vivid details. Every person, place or thing Little passes, he savors, and it savors him right back.

Born in 1958 in Hartford, one of thirteen children reared in a multicultural setting, Little, a half African American and half Mohawk Indian says he was always told while growing up that he entered the world with two automatic strikes against him. The first strike was that he was black, and the second strike was that he was male and that even if he told the truth, people would think he was lying anyway. So he figured the only way he could null those strikes was to practice random acts of kindness. He has done that, every day and every place since then, while traveling, working construction, working for Labor Ready and putting on plays and volunteering between Providence, Hartford, and New London, evolving into a nomad with a lifelong mission “doing unto others as they would do unto you.”  Extremely intelligent and a gentle, articulate speaker Little has paved a way for himself. And a good one at that.

Little earned the nickname “Gypsy,” from his mother at a young age, because he never stayed still. He was notorious for being three places at once, one time sending her three postcards from three different states and then arriving home before the postcards had even arrived. Always coming, or going, Little says he strongly believes in the butterfly theory, that caterpillars have to climb up a tree to take a good look at the world they are going into, then they mature and flap their wings and fly to their cocoon of choice. New London was his choice.

Six years ago, that same theory, combined with advice from Navajo and Lakota Sioux elders that he needed to move to near the mouth of an ocean or a river in order to pull his strength from it, Little picked New London off a map, wrote the Jay Street Shelter, and arranged a 60 day temporary stay there to bide him time, get the feel of the place, and to find work in the area. Little believes his chance started when he first got here, as a baby faced 40-year-old, with 40 years of built-up enthusiasm on a search for some balance, energy he says he owes to a drug-free life.

“ I have always had a passion for rivers, lakes, the ocean, and for people’s culture and diversity in life,” Little says. “ And that’s why I like New London, it’s small, and I found all of that here.”

He has finally found a niche, a city that feels like the world to him. A city where he could finally envision his dreams coming true. Even if those dreams were short-lived.

“You know when you’re a kid you always dreamed about being something like a jockey, or a doctor or a lawyer,” Little says. “ I never wanted those things, I just wanted to have a nice easy life near the water without struggling with bills and without being trapped by a thirty year mortgage.”

The first four years he was in New London, Little worked three different jobs. He’d go to Farias, a sister company of Sheffield’s in Montville early in the morning until 4 p.m. and then head to bar back at Heroes Café on Golden Street where he would stock the coolers, and then head to his other job at the Bank Street Lobster House, where he was quickly promoted from maintenance and dishwashing to managing “ The Outdoor Gaslight theatre,” an outdoor theatre Little initiated in the space where he normally mowed the lawn.

“ One day I told my William Bourque, my boss at the Lobster House that we needed to do something with the back yard of the restaurant, and he gave me the go ahead,” Little says. “ My idea lasted more than four years.”

The Outdoor Gaslight Theatre was the brainchild of Little’s and Bourque’s, an oasis they created behind the Bank Street Lobster House on 194 Bank Street as a haven for what Little says,” free spirits and the salt of the earth,” where working stiffs and the rich, ate side by side and integrated, watching movies such as the “Rocky Horror Picture Show,” projected on the massive white wall across from the restaurant. Just mentioning the name “ The Outdoor Gaslight Theatre,” now brings tears to Little’s eyes, because now the property has been sold, the glass front door of the restaurant is no longer open, but is cracked and shattered, and the murals and the stage Little proudly painted during the Boats, Books, and Brushes festival in the backyard is overgrown, the paint visibly chipping and fading, weeds knee high.

Little still returns there every day to visit the site, checking for progress, closing his eyes remembering the twelve weeks of live performances on the lawn, where 512 chairs donated by local churches were sold out every night, where talented artists, singers, sculptures, jugglers, and other local VIP’s had a backyard venue performing for a live, late night electric audience and he shakes his head at the heartbreak of it all, crushed that the vision he brought to fruition is now a refuge for “rats, roaches, and junkies.” But in the same breath, Little reverts back to the positive, saying he has heard a rumor that the Hygienic will be opening their own Outdoor Theatre shortly, following in the Lobster House footsteps, taking over where they left off. That is when his tired, watery eyes, get a little brighter, a little more static. “At least now if the Hygienic steps in, I know what I built won’t disappear.”

Little knows almost too well how fast things disappear, especially after his dream job at the Bank Street Lobster House became extinct and he is back to working at Labor Ready which allows him to scrape by, but doesn’t allow him the dream house he always drives by on Pequot Avenue with the white picket fence, a stocked fridge, dogs, a yard, and a wife to come home to, all of which he’d hoped to have by the time he was 46-years-old.

On each of his shoulders he has a tattoo of a reaper. One of the reapers reads, “ You,” and the other reaper says, “ Next.” Little says both those words, and the reapers together symbolize how everyone has pain, and they serve as a reminder for him that although people may be having a good time one minute, a bad time may be lurking around the very next corner. Little says people always respond “Oh, no, not you!” when a tragedy befalls a good person, and then shortly afterwards that person realizes they are not immune either and that is when they begin cherishing their time more wisely, a lesson Little already knows.

Little’s tattoos in no means reflect a doomsday personality; they represent much more, his ability to pick up the pieces and move on. He humbly mentions that he earned the nickname, “Ant man,” at the Bank Street Lobster House because he could lift ten times his weight and then some, where he always did what was expected of him and more.  But his muscles earned less of that reputation, then his heart did. His sheer will carries most of the weight. And he’s taken that will with him. Little is a human archive of stories, a spirit with the moral fiber that many would be thrilled to write a book about. He is a man who has been there and done that and is still doing.

Little volunteers as much as he gets paid. In only six years that he has been here, he has helped build the Amistad and launch it out on the water, he’s been a bell ringer and a hat collector for the salvation army, he’s volunteered his services in Boats, Books, and Brushes and the raft races, raked leaves for anyone he sees with a rake and not even taken a penny in return. He has helped people move all day and leaves without even telling them his name. He has been called by local business owners in the area as the “ phantom snow shoveler,” disguised in an orange jumpsuit in the winter, offering his services outside their establishments for nothing, except to see the happiness spread across their faces.

“I want to make someone happy,” Little says getting choked up. “ Then maybe someday, someone will make me happy.”

One such person that made a lasting effect on Little’s life was his uncle who died while in the service when Little was a young boy, so with him in mind, and the need for more financial security after the closing of Bank Street Lobster House, Little and his close friend Mel, a bartender at YKnot Café recently started a traveling production company called, “ Ant man Productions,” originally comprised  as a tribute to all American Veterans at American Legion Post’s around the state of Connecticut and established in part, as a way to honor the uncle Little no longer has with him.

“ I made a promise to my uncle that when I got big I would do something about it,” Little says. “ And to try and ease that childhood pain and loss I wanted to do this, for him and for those overseas right now.” Little and his performance troupe, a cast of over 30, recently entertained the National Talent Search who came to New London with an original play entitled, “ I am a 19-year-old trapped in WWIII,” with songs about those not coming home, written and sung by 19-year-old New London resident, Amber Sitty, who Little calls his “songbird, his star.”

Referring to himself as an informal set designer for his production company, Little says it has been difficult to get his dramatis personae together consistently though, so he has to rely on the word of mouth system of recommendation and sometimes even recruiting people walking down the street as stand-in’s. And they do stand in: no questions asked. Little says his main thrust right now, other then landing a full-time job to enable him to stay in New London, is to keep producing, practicing and writing, so that if the Hygienic does build their theatre he’ll be ready to make a proposal to them. And he’ll have a new home away from home to exhibit his plays where he will still have a chance to “be the added jewel in New London’s crown.” 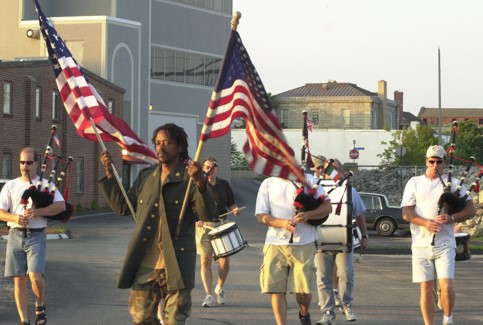 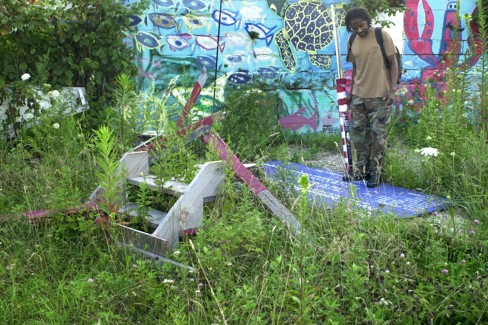